The Covenant of Mayors in Sub-Saharan Africa participated in the Africities Summit 9 by hosting several sessions, including a high level opening plenary to mobilise and expand the CoM SSA network and officially launch the Sustainable Energy Access and Climate Action Plans of two signatory cities. CoM SSA used the Summit as an opportunity to bring together the newly-elected CoM SSA Regional Mayors Forum for their inaugural meeting. Nine mayors representing the four regions of Sub-Saharan Africa took part in a closed session where the chairperson, Mayor of Kloto I (Togo) was elected.

These plans set ambitious and achievable targets and actions to limit the county's future emissions and adapt to the expected impacts of climate change, ultimately building a resilient, healthy future for the people for Kisumu and Nakuru.

Throughout the session key stakeholders highlighted the role of local governments in the building a more climate resilient world and how African governments, like Kisumu and Nakuru County are leading the way.

The European Union Ambassador to Kenya Henriette Geiger, representing the principal co-funder of CoM SSA, said, “local governments are powerful forces of change and the commitments of more than 280 cities in CoM SSA proves it. The development of SEACAPs and the waste management projects of these cities should be an inspiration to us, to the African continent and to the world.”

During this session the chairperson of the Regional Mayors Forum (RMF) delivered his inaugural address. Mayor of Kloto 1, Yawo Winny Dogbatse emphasized the urgency of taking climate action in Africa and the role of the CoM SSA in achieving this: “We need bold action to respond to the climate and energy emergency and ensure the inclusive and green development of our territories. Africans have not had the time to consider them, and CoM SSA has a major role to play in making this vision to be realised.”

The RMF members were elected by their peers and represent the voices of over 280 CoM SSA signatory cities. Currently, it is composed of nine mayors representing the four regions of Sub-Saharan Africa (Southern Africa, Central Africa, Western Africa, Eastern Africa). At Africities, the RMF sat for their inaugural meeting where the mayors began to set their vision for the future they want to see for African cities which will be further built on in the coming months.  Sub-Saharan Africa is at the epicenter of climate change response, both in terms of adapting to the impacts (most vulnerable continent) and in terms of leap-frogging fossil-fuel dependent development. However, Africans have not been afforded a moment to envision the future they want and CoM SSA has a major role to play in ensuring that this visioning comes to fruition, in partnership with the EU, as well as to ensure that these messages are taken forward at the highly-anticipated COP27, which will be held in Africa in Sharm el-Sheikh, Egypt in November 2022. 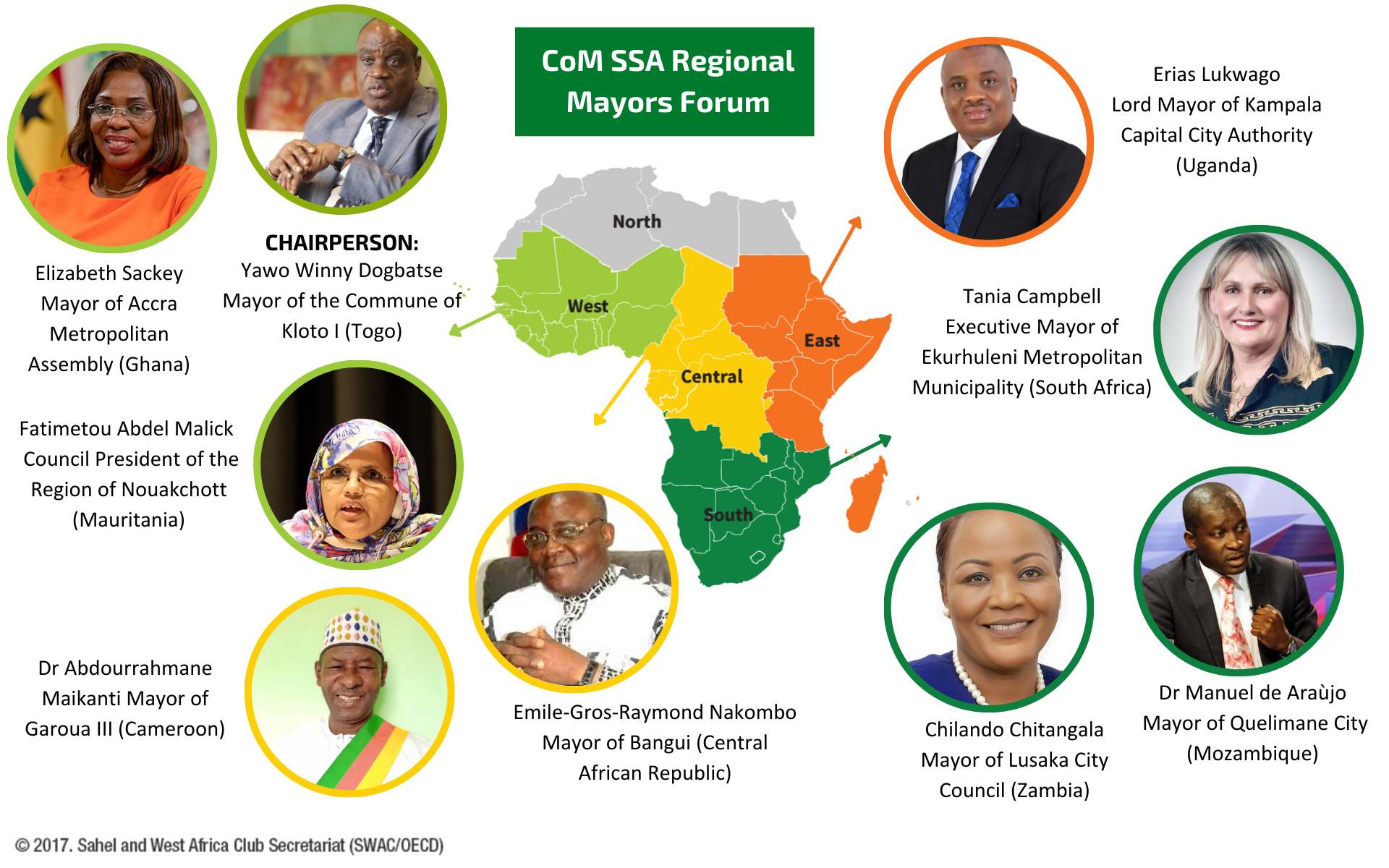 In alignment with the Africities Declaration, where delegates “affirmed that climate change is a key issue for our territories and recommend to local governments to adopt the necessary measures to prepare their territories for the consequences of climate change and invite them to adhere to the Convention of African Mayors for Climate,” the nine mayors elected to the RMF will play a leading role in advocating for concrete action on climate change and serve as an ambassador for the CoM SSA initiative. The mayors will play a crucial role in the governance of CoM SSA initiative, bringing forth the priorities of their fellow signatory cities. The RMF will play a critical role in advocacy, specifically on issues related to climate finance, the development of resilient and sustainable infrastructure, and energy access.