In Cabo Verde the Spanish Cooperation is supporting Ribeira Grande de Santiago and Praia municipalities in their journey as signatory cities of the Covenant of Mayors for Sub-Saharan Africa (CoM SSA), a programme co-financed by the European Union. Since 2019, CoM SSA focuses on attracting climate-related funding at the local level to move from planning to action.

After the recent change of government in the Municipality of Ribeira Grande de Santiago (municipality whose capital is Cidade Velha), we had the opportunity to briefly talk with the Mayor of Ribeira Grande de Santiago (CMRGS), Dr. Nelson Moreira, who kindly explained his expectations about this European action. Within the conversation about energy policies that would be implemented in the municipality and the activities planned under the framework of the CoM SSA programme, the mayor begins by praising the importance and scope of the project and thanking CoM SSA partners.

"On behalf of the Municipality of Ribeira Grande de Santiago, I convey a special thanks to the European Union and the Spanish Agency for International Development Cooperation (AECID), co-funders of the CoM SSA programme, for supporting the implementation of the project "Support to the Covenant of Mayors in Sub-Saharan Africa (CoM SSA) - Phase III in Ribeira Grande de Santiago, Cabo Verde".

1. How is climate change affecting Cidade Velha and the municipality of Ribeira Grande de Santiago (CMRGS)?

Climate change has been a global concern, its acceleration being aggravated by anthropogenic actions through fossil fuel combustion activities that generate greenhouse gas emissions. The effects have been significant in our archipelago. Cabo Verde is located in a sub-Sahelian zone, with an arid or semi-arid climate, and climate change effects have impacted our ecosystem. Considering our climate and as a result of global warming, droughts in our municipality are more prolonged, rainy periods are shorter but more intense. All this triggers floods and causes damage not only in the lower areas of Cidade Velha, but in other locations in the municipality. On the other hand, due to the effects of this climate change, there is greater erosion on the beaches and strong indications of considerable loss of marine biodiversity.

Furthermore, there has been an accentuated salinisation of agricultural soils, taking into account the phenomenon of saline intrusion near the coastal aquifers on a global level, thus negatively impacting the production capacity of the soils and reproduction in the seas and oceans.

2. How could the Sustainable Energy Access and Climate Action Plan (SEACAP) help Cidade Velha and the county combat climate risks?

Being the first climate action plan in the municipality and in the country, the SEACAP will be a strategic instrument as it will guide the adoption of mitigation measures to reduce greenhouse gas (GHG) emissions and mitigate the incidence of climate change.  It will also act as a compass for institutions, private operators, and the citizenry to adopt assertive policies and measures to combat climate risks.

3. What difficulties were encountered in the planning process?

As a pioneer tool at the national level, the challenges are related to finding expert technicians for planning of the SEACAP. However, Ribeira Grande Municipality had already outlined its priorities and implemented some adaptation and mitigation measures to minimise some of the issues that the project wants to address.

It should be noted that among the twenty-two municipalities, only the two municipalities of Praia and Ribeira Grande de Santiago are part of the CoM SSA programme. To accelerate the implementation of policies that give a long-term vision response to climate challenges that are based on three pillars, namely: (i) access to sustainable energy; (ii) mitigation and (iii) climate adaptation, the two cities under the coordination of AECID, will launch an international public tender very soon for the hiring of a consultant for the elaboration of the SEACAP for these municipalities. 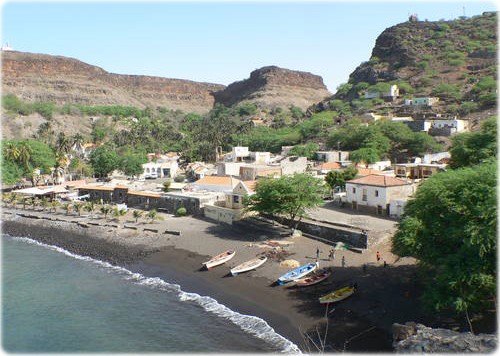 Panoramic view of the lower part of Cidade Velha ©CMRGS

4. What are the expectations of Cidade Velha in the implementation and execution of the project?

In the short, medium, and long term, we believe that the implementation of the SEACAP will contribute to a paradigm shift in the institutions and service providers working in the municipality. Of course, it will also contribute to a new awareness for the citizens, oriented towards more climate-friendly behaviors and therefore, planet-friendly.

In the first phase, we will implement the pilot project - Implementation of a Photovoltaic Energy System. The goal is to ensure the energy requirements for operating the services of the Municipality of Ribeira Grande de Santiago and the public lighting of spaces and heritage sites of Cidade Velha. It will contribute to a substantial reduction of the cost associated with conventional energy consumption by more than 80%, freeing up resources to strengthen investment in sensitive axes, such as human capital and social cohesion.

In the medium and long term, CMRGS expects to contribute even more to reducing GHG emissions in the atmosphere when adopting policy measures aimed at electric mobility in the framework of the Agenda 2030, the Energy Transition Policy, and the Policy Charter for Electric Mobility.

5. How will the population of Cidade Velha benefit from the infrastructure to be built in the city?

The benefits will be felt. Firstly, at the level of greater awareness by all residents, so that we can all think and do differently, impacting as little as possible on our ecosystem, our climate, the health of our planet.

The project has a vital component of raising awareness for a new consciousness, a new awakening, and a new action aligned with best practices to reduce the impact of our activities and daily lives.

By awakening, we as a community need to orient ourselves towards a new look and a new action. The results in themselves will trigger a great sense of pride and satisfaction on the part of the population, not only of Cidade Velha, but of all citizens.

6. What are the advantages of working in a network of African cities?

For us, the advantages are immeasurable. This municipality believes that we can only move towards a future that is necessarily better and desirable for all by networking.  When the challenges are similar at the level of the members of a network, the will to overcome them is even greater. Because of this and the sharing of information and experiences, it is crucial to reach a good success rate.

7. How do you see the city in the medium/long term with the implementation of SEACAP?

In the medium and long term, we imagine a more environmentally friendly Cidade Velha focused on policies and measures to mitigate the effects of climate change; a Cidade Velha and a municipality that invest more in raising awareness and educating its citizens to allow and tread new paths for the sustainable development of the municipality; that can inspire this and future generations; and as a reference at the national level and beyond borders.

We believe that this is an excellent opportunity to take a qualitative leap to begin to walk the path to give answers to the great desires and dreams of the people of Ribeira Grande de Santiago.