Access to energy in times of COVID-19 in Dakar

How can local governments in Sub-Saharan Africa facilitate access to finance?

The European Commission’s Joint Research Centre validated Yaoundé IV’s SEACAP in September 2020. Yaoundé IV is the first Sub-Saharan African city and the first CoM SSA signatory to achieve this milestone, in the journey towards a climate resilient and sustainable future.

For the past three years, the capital of Cameroon, Yaoundé IV has been developing its Sustainable Energy Access and Climate Action Plan (SEACAP). All Covenant of Mayors in Sub-Saharan Africa (CoM SSA) signatories make a political commitment to develop a SEACAP, which outlines concrete measures for climate adaptation, mitigation, and access to sustainable energy. It details the steps a local authority intends to take in order to adapt actions in response to the impacts of climate change, reduce emissions and further access to sustainable energy. 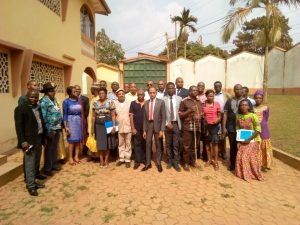 In the initial phases of the SEACAP, cities and local governments undertake a risk and vulnerability assessment, a greenhouse gas emissions inventory and an access to energy assessment. From here, they define goals and establish a vision for how they would like to develop sustainably and transform their societies.

The SEACAP process is a defining moment in designing a local government’s climate action. It provides cities an opportunity to define what steps are needed to achieve climate and energy related goals for a more climate resilient future. Governments employ a holistic approach, working collectively with various departments in their commitment to take climate change seriously and act accordingly. Developing a SEACAP can be seen as the critical, first step in unlocking climate finance and seeing data-responsive implementation on the ground.

Yaoundé IV Mayor Biyini Effila Gabriel highlights some key lessons from the SEACAP journey to success, saying “the development of the plan must be participatory by involving all social actors. It should also be noted that using the synergy of several parallel expertise is very important as a key lesson. Finally, it is important to be open to the observations and suggestions of the technical partners and to be able to establish partnerships with civil society organisations with expertise in the field.”

The European Commission’s Joint Research Centre has played a critical role in the initiative by developing the SEACAP guidebook and offline reporting template. These tools are fundamental to the process as the guidebook provides directions and advice to local governments on the steps to follow when developing their SEACAP.

Valentina Palermo from the Joint Research Centre of the European Commission, who is supporting the Sub Saharan cities in their SEACAP process, said: “This is a huge achievement for Yaoundé IV as with its SEACAP the city establishes a clear and concrete path towards the sustainability and resilience of its territory and increased energy access for its citizens. It is through the effective implementation of the plan that the climate change mitigation, adaptation and energy access targets will be achieved. The SEACAP process in all its steps can be inspiring and instrumental for other local authorities who are already developing their plans or will join the CoM SSA initiative in the future.”

African cities can be inspired by Yaoundé IV’s commitment in creating their SEACAP. The capital city of Cameroon is now in a unique position to provide input and tips to fellow African local governments. To hear more, tune in to CoM SSA Day at LoCS4Africa 2020, click here to register.