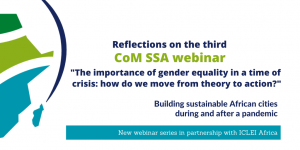 A resilient society depends on climate action and gender equality.

To see on-the-ground change, a mental shift on the role of women in urban and rural spaces must first take place. On 28 July, in a CoM SSA webinar titled “The importance of gender equality in a time of crisis: how do we move from theory to action?”, a panel of specialists on gender, climate and urban development discussed how mainstreaming gender equality is central to building resilience to the shocks of global crises, and provided concise solutions to achieve this.

The webinar presented the opportunity to expand on a common cause; that the climate issue is also a gender issue. In a concise opening remark, Hon. Mayor Gisèle Rose of the Doumé district in Cameroon and Secretary General for UCLGA’s African Women Mayors Network (REFELA) asserted that “climate change [was] not felt in the same way by men as by women.” Mayor Mpans drives action for gender equality and has seen how raising awareness, developing local strategies, and including women in decision-making processes are key to empowering women, saying that “women understand and appropriate the climate change cause, as they are directly affected by its impacts.”

Giulia Maci, Head of the Cities for Women Programme, Cities Alliance (UNOPS) points to a system that never regarded women in the first place: “cities are built for men,” she says, but “at the centre of a resilient city are empowered women, who are also at the forefront of the climate crisis at grassroots levels and in response to Covid-19 as caregivers.” She asserts that gender expertise in city planning will enable a cross-cutting approach wherein food, energy, and transport systems would empower women.

As the climate crisis continues to expose the way in which infrastructure disserves women, the COVID-19 pandemic has exacerbated existing inequalities. Gifti Nadi, Deputy Regional Director of Africa C40 Climate Leadership Group draws a parallel between the two crises: “the pandemic has impacted women specifically and disproportionately, especially in the Global South.” Similarly, gender-responsive decisions on climate policy are “part of a human rights-based approach focusing on inclusive and just policy making.”

From theory to action

To achieve on-the-ground change, Nachi Majoe, Strategic Alliances Manager and Senior Professional Officer in Climate Change, Energy and Resilience for ICLEI Africa, explains that gender equality is the goal and gender mainstreaming is the strategy. To this end, ICLEI Africa has recently launched the Women Leaders League to connect subnational women leaders to bring about suitable gender policies and actions that cities can adopt.

Mainstreaming gender into urban policy would translate into change at city-level in the same way as climate action, Gifti Nadi explains, adding that inclusive leadership, gender budgeting, and gender parity are crucial in seeing the gender agenda translated into action.

Driving city-level climate change action is effective, according to Fleur Newman, Gender Focal Point for the UNFCCC. Since people live and work in cities, urban communities can drive collective action – as the response to COVID-19 has demonstrated – and act as the bridge between local, national, and international climate action.

Nasreen Al-Amid, founding director of Surge Africa believes effective messaging is fundamental to inspiring community action. Their work centres on cultural and context-specific storytelling as an impactful way to raise awareness. For people to internalise a message, “you have to wrap your information around a story,” she explains, saying that Surge Africa uses social media as a tool for positive change by providing young people with resources.

Beyond awareness, gender parity is vital: In Cameroon, Mayor Mpans says women in leadership roles has increased steadily over the last decade: “it is small, but significant progress for us to gain ground.” It is also typically women mayors who tackle climate issues, Giulia Maci says. Cities Alliance is working directly with women’s grassroots initiatives in the fight against the pandemic. “We focus on messages and women’s role in preventing the spread of the virus.”

Dr Meggan Spires, Senior Manager for Climate Change, Energy, and Resilience at ICLEI Africa chaired the webinar and concluded that the discussion was rich and resolute in the way in which it unpacked a complex set of challenges in an accessible manner and placed women at.

🚨▶️ Subscribe now to our CoM SSA’s Newsletter! Find out what CoM SSA and partners are doing to support cities across Africa.