Join CoM SSA’s next webinar on 25 March at 14h00 CAT, for a deep-dive on the state of renewable energy in African cities. The webinar brings together city and renewable energy experts to share their perspectives on the current status, challenges and discuss how local governments in the region are heeding the call to act on renewable energy.

As the demand for energy rises due to rapid population growth and urbanisation, cities in Sub-Saharan Africa are increasingly recognising the opportunities of renewable energy use. National governments often have the mandate to govern energy supply and infrastructure, and to lead the transition towards renewable energy systems. Nonetheless, local governments remain in a unique position to positively influence energy use towards climate-friendly systems and reduce related greenhouse gas emissions.

Cities (their governments, inhabitants, commercial and industrial entities) play a key role in effectively accelerating the transition to renewables in the power sectors, as well as in the heating, cooling and transport sectors. Local governments in Sub-Saharan Africa have particularly facilitated the implementation of renewable energy at local level in many ways, including facilitating joint initiatives led by the national governments, development finance institution and/or private actors; forming public-private partnerships to promote e-mobility; and/or joining network that support knowledge and capacity building on renewable energy. 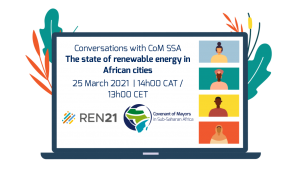 The Covenant of Mayors in Sub-Saharan Africa aims to support local governments to build knowledge and internal capacity on renewable energy data and projects. To this end, CoM SSA partner GIZ co-financed the REN21-led report: Renewables in Cities 2021 Global Status Report, which features a deep-dive on renewable energy uptake in Sub-Saharan African cities. The report identifies key opportunities and challenges for advancing renewables in urban settings of Sub-Saharan Africa, distinguishing the following categories: policy and regulation, access to financial market, the need for city-level data and inter capacity and knowledge building.

The report will be presented on Thursday 25 March at 14h00 CAT, during the Conversations with CoM SSA webinar series on the state of renewable energy in African cities which will bring together city and renewable energy experts, CoM SSA signatories, the REN21 community, and other key stakeholders. Click here to register.

The webinar aims to highlight existing approaches to deploying and using renewables, show examples of local projects in Sub-Saharan Africa, and encourage exchange between cities and other stakeholders in the context of the transition.